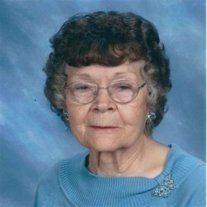 Zella Olive Chase was born November 15, 1920, to Ervin S. and Zoa M. (McGowan) Anderson in Hewitt, Minnesota. She attended country school. She was united in marriage to Harvey Chase July 4, 1936, in Hewitt. Following their marriage they farmed north of Hewitt and raised their daughter, Shirley. Her husband, Harvey died in the 1970's. Following his death, Zella received her GED and learned to drive. She moved to Perham where she worked as a nurse's aide at a nursing home. She moved to the State of Washington, in 1977, to be closer to family. While in Tacoma, she worked as a nurse's aide at Tacoma General Hospital. Zella played accordion with the Washington Old Time Fiddlers Association in Tacoma for 18 years. In the early 1990's, she moved to Columbia Falls, Montana to continue to be closer to family. She belonged to the Columbia Falls Methodist Church and Senior Center in Columbia Falls where she continued to play the accordion. After 13 years, she returned to Minnesota to live with her daughter, before moving to McCornell Courts and eventually St. William's Living Center in 2007, where she continued to live until the time of her death. Her hobbies included playing the accordion, crocheting, other crafts, gardening, fishing and hunting.

Urnbearer will be her grandson, Darren Lundgren.

To order memorial trees or send flowers to the family in memory of Zella Chase, please visit our flower store.
Send a Sympathy Card