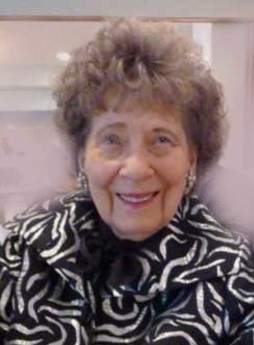 The celebration of life service planned for Saturday, June 20 will be postponed until further notice.

Bonnie was born on October 21, 1924, to Frederick W. and Rachel E. (Katchinska) Fischer in Rockford, Iowa. She graduated from John Marshall High School in Minneapolis in 1943 and took classes to study to be a nurse. When the United States was attacked by the Japanese at Pearl Harbor on December 7, 1941, Bonnie worked as a “Rosie the Riveter” at Northern Ordnance in the Twin Cities inspecting ammunition. She would later work at Bell Telephone in Minneapolis as an operator for many years. In 1944, she would meet the love of her life, Clifford Anderson. Cliff had worked with Bonnie's father, Fred, at Northern Pump while he was in college. When war broke out, Cliff joined the U.S. Navy in early 1942. Fred had always promised Cliff a “chicken dinner” when he was home on leave. Cliff was home on leave in 1944 and Bonnie would answer the phone. She didn't know Cliff at the time, put her father on the phone and he would invite Cliff over for dinner that night. Bonnie saw Cliff get off the trolley car and thought “holy cow, that's a good-looking guy.” She quickly got “dolled up” to meet him. When she met him, Cliff held her hand for the longest time and Bonnie was starting to get a little “embarrassed.” Bonnie's mother, Rachel, always said it was “love at first sight” for Cliff. From that time on, Cliff and Bonnie would start dating and would be married on December 22, 1948, in Minneapolis. Bonnie would still be holding Cliff's hand when he died on August 28, 2017 after being together for a total of 71 years. He called her “Beautiful,” “Sweetheart,” “Lady Yvonne,” and his “Angel.” Faith, family and friends were very important to Bonnie. She was a Sunday school teacher at the United Methodist Church in Willmar along with being a Vacation Bible School teacher at Decision Hills in Spicer, Minn. She was also involved in the Rebekah Circle, Sunday communion, a prayer chain coordinator and prayer warrior, and involved with the Fall Bazaar all at the United Methodist Church in Willmar. She was also a volunteer for many years helping those with mental illnesses and served as a Girl Scout leader at The Presbyterian Church in Willmar. A special thank you to the staff at LB Hospice, Knute Nelson and Nelson Gables both of Alexandria.

She was preceded in death by her husband, Cliff, of 68 years; parents; one sibling in infancy, Bertha Fischer of Rockford, Iowa; one granddaughter; and one grandson.

To order memorial trees or send flowers to the family in memory of Yvonne "Bonnie" Doris Anderson, please visit our flower store.