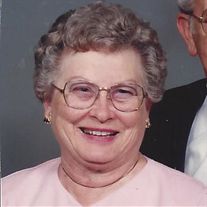 Visitation is 4-6 p.m., Sunday at Mt. Calvary Lutheran Church. The visitation will continue one hour prior to the service at the church.

Wilma Constantina Augusta Stockman was born August 13, 1924, to Alfred and Louise (Heck) Kazeck on a farm near Randall. She was baptized August 31, 1924, at St. Peter's Lutheran Church in Randall. Wilma was confirmed May 28, 1939, at Zion Lutheran Church in Little Falls. She attended country school in Parker Township, Green Township and graduated from Little Falls High School in 1943. Following her education she worked at Munsingwear Inc. She was united in marriage July 9, 1955 to William Stockman at Zion Lutheran Church in Little Falls. Following their marriage they raised three children and lived in Parma, Idaho; Cornelius, Oregon; Benson and Farmington, where her husband served as minister. Following her husband's 38 years of ministry they retired to their lake home on Lake Vermont, rural Parkers Prairie. They later moved to Garfield where they have lived for the last ten years. Wilma was a member of St. John's Lutheran Church in Garfield and previous member of many churches that her husband served. She also made many quilts for World Relief. Wilma enjoyed baking, cooking and collecting salt and pepper shakers. She also loved to quilt, sew, crochet and entertain family and friends.

She was preceded in death by her parents; three brothers, Elvir Kazeck, Eldor Kazeck and Rueben Kazeck; and sister, Rose Borck.

Pallbearers are the pastors of the Alexandria circuit.

To order memorial trees or send flowers to the family in memory of Wilma Stockman, please visit our flower store.