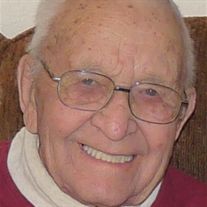 Visitation is 2-5 p.m., Sunday at St. Edward's Catholic Church in Henning and will continue one hour prior to the service.

William "Bill" Stone was born on September 23, 1921, to Herbert and Ethel (Sparks) Stone in Elmo Township, Otter Tail County. Bill lived most of his life on the farm where he was born. Bill was united in marriage to Marcella Blashack on August 9, 1949, at St. Joseph's Church in Bertha, Minnesota. They farmed together and were later joined in the operation of their dairy farm by their son Bruce and his wife Arleen. Bill and Marcie were recognized with the Valley Farmer and Homemaker award in 1983. Upon his retirement in 1991, Bill pursued his other interests, living in their rural home in Henning and then their lake home on East Battle Lake in Vining. He and Marcie spent many winters in Pharr, Texas. Bill was active in his community, serving on several boards including the Minnesota Dairy Promotion Council, Town Board, and the Soil and Water Board. He also served as County Commissioner for District 4, Otter Tail County, for eight years from 1991 to 1999. Bill's children, grandchildren and great-grandchildren were his pride and joy.

Bill will be remembered for the "trips to the candy store" on the pontoon boat and 4th of July celebrations on the lake with his children and grandchildren. Bill lived by the motto to work hard, play hard and be a man of his word. He leaves a legacy of laughter and quick wit. Bill enjoyed being outside in his yard, hanging out in the hunting shack, playing cards and any time spent with family and friends. When asked how he was doing, he typically responded with "Better Every Day!"

Bill was preceded in death by his parents and two sisters, Martha (Ervan) Judson and Sylvia (Wilfred) Bureau.

Special thanks to the wonderful staff at Willow Creek in Henning (which Bill affectionately dubbed the "Henning Hilton") for their loving care and sense of humor. The family also wishes to thank Legacy Home Care and Hospice of Wadena for their support and guidance in the past three weeks.

To order memorial trees or send flowers to the family in memory of William Stone, please visit our flower store.