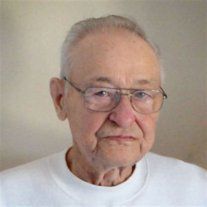 William "Bill" Archie Schram was born August 19, 1920, to William and Ottilie (Brueske) Schram in Parkers Prairie. He was baptized September 19, 1920, and confirmed April 14, 1935, at Immanuel Lutheran Church in Parkers Prairie. He attended country school and worked various jobs in the area before he moved to work in a C.C. Camp and shipyard in California. He was united in marriage to Hazel Wallner. Following their marriage they lived in the Twin Cities where they raised their sons, Steve, Michael and Alan. He worked maintenance in the St. Paul stockyards until his retirement, at which time he moved to Miltona where he lived until the time of his death. He was a member of Immanuel Lutheran Church. In his earlier years, he enjoyed fishing, hunting and spending time with friends.

He was preceded in death by his parents; wife, Hazel in 2008, five brothers and three sisters.

To order memorial trees or send flowers to the family in memory of William Scram, please visit our flower store.