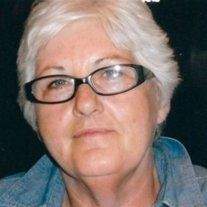 A memorial service will be held 2:00 p.m., Friday, August 24, 2012, at Lind Family Funeral Home in Miltona with Rev. Cindy Lou Schmidt officiating. Burial will be at Parkers Prairie Cemetery.

Wendy Lee was born August 9, 1956, to Gordon and Josephine (Ziesmer) Karger in Parkers Prairie. She was baptized and confirmed into the Lutheran faith. She spent her early years in Parkers Prairie and later moved to Minneapolis where she attended Trinity First Lutheran School and graduated from South High School. Following her education, she continued living in Minneapolis and worked at Falconers Laundry and Dry Cleaning. She returned to Parkers Prairie in the early 1980's, and worked for Fingerhut in Alexandria. She was united in marriage to Gary Schultz on August 11, 1984, at St. Paul's Lutheran Church in West Miltona. Following their marriage they lived in the Parkers Prairie area for 16 years. She has lived in Miltona since 2007. She worked at several hotels in Alexandria and for the past nine years worked as a cook at Chet's Lakeside Inn. Wendy enjoyed crafts, including stamping. She especially loved spending time with her family, children and grandchildren.

She was preceded in death by her parents; seven brothers; and former husband, Gary.

The urn bearer will be Jesse Allen. Honorary urn bearers will be her grandchildren.

To order memorial trees or send flowers to the family in memory of Wendy Karger, please visit our flower store.