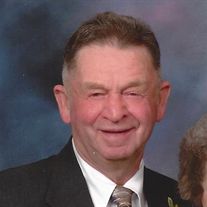 Walter Heiser, age 87, died Sunday, May 10, 2015, at his home, surrounded by his family at Windmill Ponds in Alexandria.

Funeral services are 6 p.m., Thursday, May 14, 2015, at Esther Lutheran Church, Eastern Township with Rev. Jeanette Bidne officiating. Music is provided by organist, Marcia Guenther. Burial is at the church cemetery.

Visitation is 5-8 p.m., Wednesday at Esther Lutheran Church and will continue three hours prior to the service at the church, (3-6 p.m., Thursday).

Walter was born April 18, 1928, to John and Margaretha (Weller) Heiser on the family farm south of Artas, Campbell County, South Dakota, where he was raised. Walter was a life-long dairy and crop farmer. He was united in marriage to Elsie Gimbel August 15, 1948, at Herreid, South Dakota. Following their marriage, they lived on the Heiser family farm where he worked with his father. He moved his family of four; Elsie, Cindy and baby Mike to Courtland, California in 1953, where he worked for Johnson Farms. They returned to Artas in 1955, when he bought the farm from his parents. In October of 1966, Walter purchased a farm in Eastern Township, rural Parkers Prairie, near Esther Lutheran Church. He farmed for 30 years. In 1996, he and Elsie moved to their home in Miltona before selling their farm in the winter of 1997. Walter moved to Windmill Ponds in January of 2014, where he lived until his death.

Preceded in death by his infant son; parents, John and Margaretha Heiser; in-laws, Ludwig and Christina Gimbel; brother, Arthur Heiser; sisters, Ottilia Horst, Edna Schaeffer, Alma Heinrich, Amanda Mayer, Hilda Stadel, Anna Bitz, and Katheryn Mettler; and numerous brothers-in-law and sisters-in-law. When asked about his family, Walter would reply with this riddle, I had 12 sisters, all were married one time, but I had 24 brothers-in-law.

To order memorial trees or send flowers to the family in memory of Walter Heiser, please visit our flower store.
Send a Sympathy Card