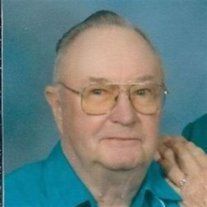 Visitation will be 4-7 p.m., Friday at the Lind Family Funeral Home in Miltona and continue one hour prior the service at the church.

Walter Marvin "Wally" Myren was born September 18, 1929, to Tore and Antonia (Ziebel) Myren on the family farm in Spruce Hill Township, Douglas County. Wally was baptized and confirmed at First Lutheran Church in Miltona. He attended Miltona Public Schools. Following his education, he enlisted in the U.S. Army during the Korean War, where he was involved in the nuclear testing of the atomic bombs in Nevada. Following his honorable discharge, he worked on a ranch in Montana for a couple of years before returning to Miltona to farm the home place with his father. He was united in marriage to Phyllis Simonson October 27, 1955, in Fergus Falls. To this union, a daughter, Mae was born. They continued living and farming the Myren family farm, purchasing it in 1958. His wife, Phyllis died in February of 1979. Wally married Mae Johnson in November of 1979. He continued farming until retiring in the early 1990's. His wife, Mae died in 1992. Wally met Ethel Arvidson in 1993, at a dance and they remained close companions for the next 20 years. Wally was a member of Faith Lutheran Church, Miltona V.F.W. Post #7826, Parkers Prairie American Legion Post #219, and past director of the Miltona Creamery Association. He enjoyed woodworking, fishing and hunting in his earlier years. He loved old-time music, especially dancing, traveling to casinos with Ethel and visiting friends and family.

To order memorial trees or send flowers to the family in memory of Wally Myren, please visit our flower store.
Send a Sympathy Card