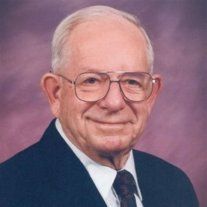 Visitation will be 5-7 p.m., Friday at the Lind Family Funeral Home in Parkers Prairie and continue one hour prior to the service at the church.

Wallace George Krumwiede was born August 6, 1919, to Arthur and Anna (Zemple) Krumwiede in Trimont, Minnesota. He was baptized in Trimont and confirmed at St. John's Lutheran Church in Wheaton, Minnesota. He attended public schools in Wheaton and graduated from Morris Ag High School. Following his education he farmed with his father until he and a friend went to Oregon. He worked for a large wheat farmer in Oregon and learned many facets of large farm and ranch work. He returned to Wheaton because of his father's ill health and continued farming. He was united in marriage to Ruth Mulvanny June 15, 1940, at Webster, South Dakota. Following their marriage they lived in Wheaton where he continued to farm and they raised their two children. In 1969, he took a job as shop foreman for Hustad Implement in Alexandria. They stayed in Alexandria for a couple of years before moving to live on Lake Osakis. Wally worked as a livestock buyer for Goodwin Livestock for many years. He and his wife moved to Lake Aaron, near Millerville where they lived for 23 years before returning to Alexandria. They moved to Parkers Prairie in 1999, where Wally farmed with Ruckheim Farms for 20 years and helped at Shooting Sports. His wife, Ruth died January 3, 2011. Wally continued living in their home and learned to cook. He was a member of St. James Lutheran Church. Wally was a gifted handy man and story teller and especially enjoyed hunting and fishing.

He was preceded in death by his parents; brother, Willard; sister, Dorothy; and wife of 70 years, Ruth.

To order memorial trees or send flowers to the family in memory of Wally Krumwiede, please visit our flower store.
Send a Sympathy Card