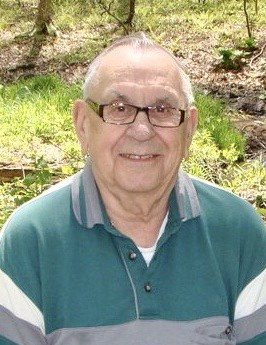 A public visitation will be held from 6-8 p.m., Thursday, at Lind Family Funeral Home in Parkers Prairie with proper social distancing practiced.

A private family funeral service will be held at 11 a.m., Friday, July 17, 2020, at Immanuel Lutheran Church in Parkers Prairie with Rev. Kirk Lee and Rev. Mark Schwarz officiating. The service will be available to watch on Jerry's obituary page after the service.  Live streaming wasn't possible today, due to technical difficulties at the church.  Our sincerest apologies to Jerry's loved ones trying to watch live.  Please check back soon. Music is provided by organist, Maureen Diedrich. Interment is at Parkers Prairie Cemetery with full military honors accorded by the Minnesota Honor Guard and the Parkers Prairie American Legion Post #219.

He was born on December 2, 1930 in the family home just outside of Carpio, North Dakota.  He was the 5th child born to Richard and Jenny (Skophammer) Anderson.  Jerry was baptized on 11/2/1932 at the Methodist Episcopal Church in Carpio.  After the death of his mother in 1932, his father was unable to raise five children on his own during the Depression.  Jerry was given into foster care to Alfred and Laura (Fritz) Wussow.  His father remained an important part of his life.  Jerry was raised on the farm in Ida Township, Minnesota.  He was educated through the 8th grade and then helped with the family farming.  Jerry was confirmed in the Christian faith in 1944 at Ebenezer Evangelical Lutheran Church of Leaf Valley Township.

He enlisted in the United States Air Force on September 15, 1950.  After doing his basic training in Texas he was sent to California and then on to Korea in 1952.  He returned to the United States in June of 1953 and was stationed in Alabama and Texas, until he was honorably discharged on November 3, 1953.  He received a good conduct medal and two bronze medals.

He met the love of his life, Janice Huwe, at a public dance in Miltona, Minnesota in 1954.   They were married on June 17, 1956 at a country church, St. James Lutheran Church in Parkers Prairie.  They were blessed with two children, a son, Douglas and daughter, Cynthia.  They were married just short of 50 years when Janice passed away in 2006.  He was very much a family man who was proud of his children, grandchildren and great grandchildren.

He owned Jerry’s Sinclair Station in Parkers Prairie for several years, worked as a repairman at Larson’s Hardware and held various other jobs.  He was then appointed to a position as a clerk for the US Postal Service.  Six years later he was appointed as a rural carrier for Parkers Prairie and Miltona.  He enjoyed driving his ‘route’ for 26 years.

After retiring from the Postal Service, he enjoyed working for Shorty and Joyce Revering for many years.  He loved gardening, yard work, hunting, wood working and sports.  He was known to sit between the kitchen and living room so he could watch two different sports on TV, while listening to a third on the radio. He liked the Twins and the Vikings, but his favorites were the Minnesota Gophers.  A love that is shared with his son Doug, his grandson Tyler and quite possibly great grandsons Braylen and Treysen.  He also loved fishing and was very proud of his 44” Muskie that he caught on Lake Miltona.

His world became much smaller as glaucoma diminished his eyesight and even smaller this year with the pandemic.  He spent his final years in St. Williams Assisted Living Center and recently in the Nursing Home in Parkers Prairie.  He was always in a good mood and enjoyed his time there among new friends and the caring staff.

To order memorial trees or send flowers to the family in memory of Wallace "Jerry" Wussow, please visit our flower store.
Send a Sympathy Card