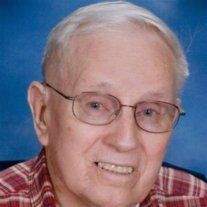 Visitation will be 5-7 p.m., Sunday at Lind Family Funeral Home in Parkers Prairie and continue one hour prior to the service at the church.

Vernon Roger Peterson was born October 30, 1927, to Albert and Hilma (Peterson) Peterson in Alexandria, Minnesota. He was a life-long member of First Evangelical Lutheran Church in Parkers Prairie being baptized January 10, 1928, by Rev. J. Edor Larson and confirmed June 8, 1941, by Rev. Lambert Engwall. Vernon attended Highway Park Country School through the eighth grade. He was drafted into the U.S. Army in 1946, and was honorably discharged in 1947. He returned to the family farm six miles north of Parkers Prairie and continued crop farming and raising hogs. He retired to Parkers Prairie in 1997. Although his education was brief, Vernon believed in life-long learning. He was an avid reader, subscribing to numerous newspapers, magazines and other publications. At the age of eighty two, he purchased his first computer. In addition, he enjoyed visiting with family and friends. He enjoyed baseball and was an avid Minnesota Twins fan. For the past ten years, he has been a resident of St. William's Living Center where he participated in numerous activities and events.

Vernon was preceded in death by his parents and brother-in-law, Leonard Paulson.

To order memorial trees or send flowers to the family in memory of Vernon Peterson, please visit our flower store.