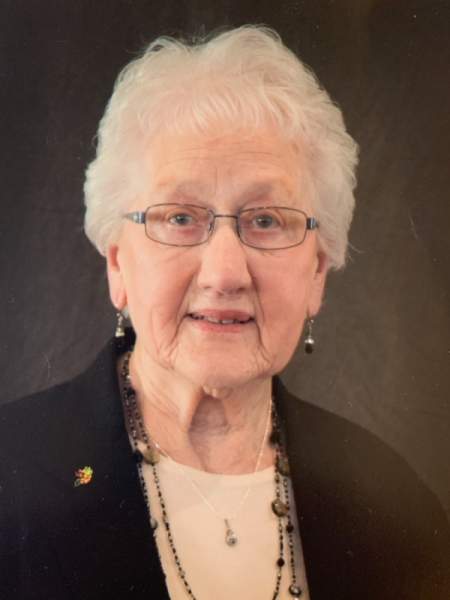 A funeral service will be held at 11 a.m., Saturday, May 22, 2021, at St. James Lutheran Church in South Effington Township, rural Parkers Prairie with Rev. Scott Brown officiating. Music is provided by organist, Vickie Schauland. Interment will be at the church cemetery.

Verla Doris Ruckheim, daughter of Herman Ludwig and Freida (Hink) Zimmerman, was born on August 22, 1922 in Parkers Prairie, MN and passed away peacefully on April 30, 2021 at the age of 98, the oldest of seven siblings. She was baptized and confirmed at St. James Lutheran Church in rural Parkers Prairie. Verla was an active member of St. James Lutheran Church as a Sunday school teacher, choir member and a longtime member of the Lutheran Woman’s Missionary League.

Verla married Eldor Ruckheim on October 15, 1940 at St. James Lutheran Church. Somehow Eldor, who was working for a neighbor, would “coincidentally” be doing fieldwork near the mailbox when Verla went to get the mail, and they often spoke of this as their first significant meeting. They eventually began their own farm in rural Parkers Prairie where they raised three rambunctious boys. They enjoyed farm life for many years the latter of which included a partnership with their son Charles and daughter-in-law Mary. This productive partnership ended when Verla and Eldor retired from farming in 1986 and moved to Parkers Prairie for the city life!

Verla loved gardening. It was said that she could put a stick in the ground, and it would grow! Flowers were always part of the garden, and she enjoyed making her own beautiful flower arrangements, especially in the later years.

Another love was fishing. There were many evening meals of fried fish which were caught that afternoon, most times with one or more of her children who required help baiting the hooks. She often one-upped the men as she quietly caught more and larger fish. This was boldly demonstrated with the catch of a twenty-six-pound northern pike when she did not even have the lure in the water!

Pallbearers are her grandchildren.

To order memorial trees or send flowers to the family in memory of Verla D. (Zimmerman) Ruckheim, please visit our flower store.