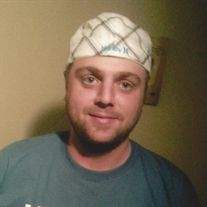 Tyler J. McClure, age 29, of Audubon, died Sunday, December 7, 2014 at Essentia Health in Fargo, North Dakota.
Memorial services are 1:00 p.m., Saturday, December 13, 2014, at First Evangelical Lutheran Church in Parkers Prairie with Rev. Del Moen officiating. Music is provided by organist, Kristi Wussow and guitarist, Wayne Renn. Burial will be held on a later date.
Visitation is one hour prior to the service at the church.
Tyler James McClure was born November 10, 1985, to Wayne McClure and Kathy Scribner in Staples. He was baptized and confirmed at Messiah Lutheran Church in Wadena. He attended Staples Elementary School and graduated from Verndale High School 2004. Following his education Tyler worked as jack-of-all trades. He held various jobs that included Sonnenberg Fur Farm, HCB both in Detroit Lakes, MnKota, masonry, and construction. Tyler was currently self-employed as Tyler's Handy Man Service in the Audubon area. During Tyler's many years of working he met the love of his life, Felicia Johnson September 3, 2003. They have been blessed with four children and have raised them in the Detroit Lakes area. Tyler was a former member of Messiah Lutheran Church. He loved fishing, hunting and snowmobiling. He also enjoyed tinkering with cars, singing karaoke and playing Texas Hold'em. Tyler was known for his generosity to others and most importantly, he loved spending time with his children and family.
He was preceded in death by his maternal grandparents, Gene (Francis) Lee and Darrell Engdahl.
Tyler is survived by his fiancée, Felicia Johnson of Audubon; two sons, Tyler McClure Jr. and Tanner McClure both at home; two daughters, Makayla McClure and Madison McClure both at home; parents, Wayne (Robin) McClure of Deerwood and Kathy Scribner of Ottertail; two brothers, Derek (Miranda) McClure of Dilworth and Jeremy Sabinash of Maple Lake; sister, Alyssa McClure of Moorhead; maternal grandmother, Claudia Engdahl of Staples; paternal grandparents, Lyndon (MaryLu) McClure of Parkers Prairie and Leslie (Judy) Carlson of Wadena; and many nieces, nephews, aunts, uncles and a host of friends.
Urnbearers are his brother, Derek McClure and sister, Alyssa McClure.

To order memorial trees or send flowers to the family in memory of Tyler McClure, please visit our flower store.