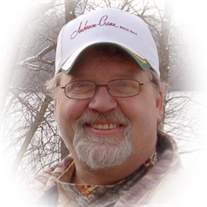 Timothy Ray Gaarsland was born on May 20, 1960, to Ray and Marlys (Lukken) Gaarsland in Fergus Falls. He was baptized and confirmed in the Lutheran faith. Tim attended Parkers Prairie Public Schools and graduated in 1978. Following his education he was united in marriage to Terry Thorpe on June 22, 1982, in Alexandria. They were blessed with four children. Tim began his career as a chef for the Holiday Inn and progressed to an executive chef for the Alexandria Golf Club. During his working career, he continued his education at Fergus Falls Community College where he received his Associate of Arts degree and worked towards a Biology and Chemistry degree. Tim was currently working as the Shipping/Receiving Coordinator for Daniel's Food Equipment. He was a member of Immanuel Lutheran Church and Ducks Unlimited of Morrison County. Tim was a sponsor of the Rocky Mountain Elk Foundation and an honorary member of the Vining Purple Palace. He enjoyed hunting, fishing, golfing, reading, and evening "toodling" - looking for wildlife. He also enjoyed watching sports especially his nieces and nephews play. Tim loved spending time with family, especially his grandchildren, who were his "lil jiggers."

He was preceded in death by his grandparents; father, Ray Gaarsland; and daughter, Tonya.

To order memorial trees or send flowers to the family in memory of Timothy Gaarsland, please visit our flower store.