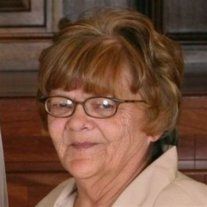 Visitation will take place 5-8 p.m., Tuesday at Lind Family Funeral Home in Parkers Prairie and continue one hour prior to the service at the church.

Susan Faye "Sue" Huckle was born October 23, 1949, to Oliver and Iola (Knutson) Nelson in Dawson, Minnesota. She was baptized December 11, 1949, at Augusta Lutheran Church in Marietta. She grew up in Marietta and graduated from Marietta High School in 1967. Following her education she worked at Coast-To-Coast Headquarters in Hopkins for three years. She was united in marriage to Robert Huckle August 8, 1970, at Augusta Lutheran Church in Marietta. Following their marriage Sue lived in Okinawa and Japan while her husband served in the U.S. Navy from 1970-1973. They returned to the States and lived in Marietta, Brookings, South Dakota and Ivanhoe before moving to Parkers Prairie in 1979. They raised their family in Parkers Prairie where she also opened her own craft and upholstery businesses, ReDo by Sue & District 40 Crafts. She worked for several years, until her health began to deteriorate causing her to give up her business. Sue was a member of First Evangelical Lutheran Church. She enjoyed country crafts, quilting, needlework and painting.

Sue is preceded in death by her parents.

To order memorial trees or send flowers to the family in memory of Sue Huckle, please visit our flower store.