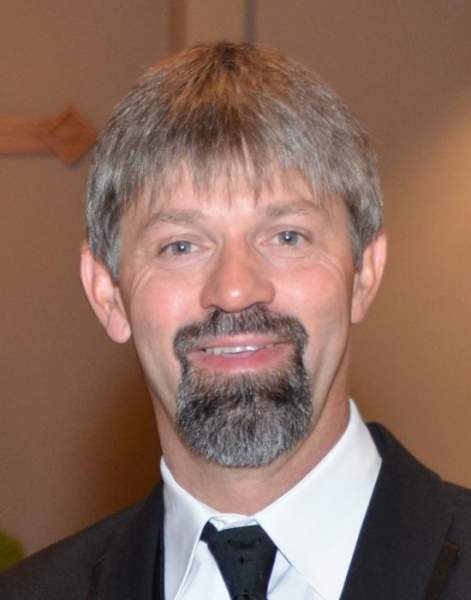 Visitation will begin 4 p.m., Friday at St. William’s Catholic Church in Parkers Prairie and will conclude with a prayer service and time of sharing at 8 p.m.  The visitation will continue one hour prior to the service at the high school.

Steve was born September 6, 1963, to James and Shirley (Schlosser) Velde in Alexandria.  He was baptized and confirmed at St. Nicholas Catholic Church in Belle River.  Steve graduated from Jefferson High School in Alexandria in 1981.  Following his education, Steve enlisted in the U.S. Navy where he did basic training at Great Lakes, Illinois.  He served on the USS Puget Sound as a boiler technician for 3 ½ years in Gaeta, Italy, where he was awarded Sailor of the Year.  Following his honorable discharge as an E4 in 1985, Steve returned to Alexandria and attended Alexandria Tech where he earned his boiler/engineer degree in 1986.  He was united in marriage to Virginia “Gini” Peppersack on March 1, 1986, at St. Nicholas Catholic Church in Belle River.  Following their marriage, they made their home in Alexandria where Steve worked at Fingerhut.  In 1993, they moved to Parkers Prairie where they raised their family and Steve worked as a custodian at the Parkers Prairie High School until present.  He enjoyed hunting, fishing, horseshoes, camping, traveling and attending rock concerts.  He especially enjoyed spending time with his family.  He was a member of St. William’s Catholic Church and the Parkers Prairie Sportsman Fishing League.  He enjoyed the students at school who were an extended part of his family and volunteering as a mentor for the Tender Hearts the past two years.

He was preceded in death by his grandparents; and several aunts and uncles.

To order memorial trees or send flowers to the family in memory of Steven Velde, please visit our flower store.