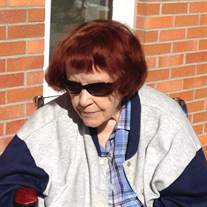 Shirley S. Kilpo, age 83, died Friday, February 19, 2016, at Ecumen Bethany Community in Alexandria, following a courageous battle with over 33 years of severe kidney disease and blindness due to diabetes.

A celebration of life service will be held at a later date this year in Duluth.

Shirley Sigrid Kilpo was born May 14, 1932, to Nestor and Vieno (Jussila) Kilpo in Floodwood. She grew up in Cedar Valley Township and Duluth, and graduated from Duluth Central High School in 1950. Following her education, Shirley was employed at Bank of America in Hollywood, California for several years before returning to Duluth. She worked in the Proof Department at Northern City National Bank in Duluth, renamed, First Bank in the 1980's. She retired in 1983, due to her impaired eyesight. Shirley and her mother moved to Alexandria in 1994, to be closer to her brother and sister-in-law, Norm and Mary. Due to a fall and injury, Shirley moved to Ecumen Bethany Community in July of 2015. Although blind, Shirley always remembered the birthdays of her nieces and nephews. She had always enjoyed reading and had hopes of traveling after retirement, but due to her health, was unable to do so. Norm and Mary wish to extend their sincere appreciation for the care and friendship Shirley received while at Viking Towers, Douglas County Hospital, Dr. Anthony Lussenhop and Bethany Home.

She was preceded in death by her parents; sister, Dorothy Rasanen; and brother, Maury Kilpo.

Shirley is survived by her brother, Norm (Mary) Kilpo of Parkers Prairie; and many caring nieces and nephews.

To order memorial trees or send flowers to the family in memory of Shirley Kilpo, please visit our flower store.