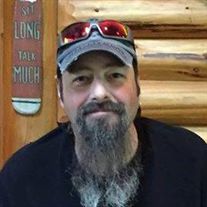 Shaun Patrick "Bubba" Norton, 46, passed away peacefully, surrounded by his family, after an over two year hard fought battle with kidney cancer, Monday, July 20, 2015 at Ecumen Bethany Community in Alexandria.

Shaun was born March 18, 1969 in Richfield, MN to Robert and Janette (Kubasta) Norton. He graduated from Rosemount High School in 1987. Shaun worked in his family plastics business from the age of 15 until they sold the business in 1999. He also worked as a bouncer in the Minneapolis area for several years, owned his own fabrication business for several years, and thouroughly enjoyed working with friends in an auto repair business for many years. In 2006 he moved to Kensington, MN and after working for the Douglas Area Trails Association (DATA) for a short time, took a position with WASP in Glenwood, MN where he was employed until cancer finally forced him to quit in 2014.

Shaun was a huge presence in life, always ready with a big Bubba hug, a story, joke and smile, first in line to lend a hand whenever and however he could, and an inspiration to many. Shaun lived life, he didn't just exist, he only knew one way and that was full throttle, wide open. He was an avid hunter, fisherman, outdoorsman, a lifelong biker, and a proud member of the Kensington Fire Department.

He is survived by his partner, Melissa Howe of Kensington; brother Jeff (Suzanne) Norton of Rosemount; and many aunts, uncles, and cousins. Shaun was preceded in death by his father, Robert; and mother, Janette.

To order memorial trees or send flowers to the family in memory of Shaun Norton, please visit our flower store.
Send a Sympathy Card