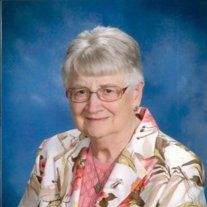 Visitation will begin 5:00 p.m., and conclude with a 7:00 p.m., prayer service Thursday at Lind Family Funeral Home in Parkers Prairie. The visitation will continue one hour prior to the service at the church.

RuthE was born June 11, 1926, to Rev. J. Edor and Alma (Larson) Larson in Parkers Prairie. She was baptized July 4, 1926, at First Evangelical Lutheran Church in Parkers Prairie, her godparents were Frank and Betsy Larson. Her family moved to Wahoo, Nebraska where she was confirmed June 22, 1941, at Bethlehem Lutheran Church. She graduated from Wahoo High School in 1944. She attended Luther College in Wahoo where she met her future husband, Obed "Duke" Lundeen. She graduated in 1946, and was united in marriage to "Duke" June 12, 1949, at First Evangelical Lutheran Church in Parkers Prairie. Following their marriage, they moved to Rockford, Illinois where he attended seminary. Following his 1953, ordination, the couple lived and worked together serving churches in North Grosvenor Dale, Connecticut, Brockton, Massachusetts, Silver Spring, Maryland and Aberdeen, South Dakota. In 1986, they moved to Miltona where they served Faith Lutheran Church and Esther Lutheran Church until retiring in 1991. RuthE was a member of Rural Aids Action Network, Parents and Friends of Lesbians and Gays, First Evangelical Lutheran Church, its circle and quilting groups, homemakers group Easternettes and Birthday Club. She loved spending time with family and friends, driving her car, traveling, being out on the pontoon and watching sunsets at her Lake Miltona home.

She is preceded in death by her parents; husband, Obed "Duke" Lundeen; and two brothers, Rev. Carl W. Larson and Rev. A. Eugene Larson.

To order memorial trees or send flowers to the family in memory of RuthE Lundeen, please visit our flower store.