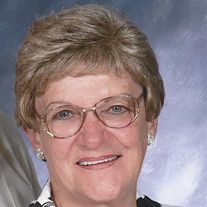 Visitation is 5-8 p.m., Monday at the church with a 7 p.m., parish prayer service followed by Christian Mother's Rosary. The visitation will continue one hour prior to the service at the church.

Ruth Ann (Klein) Thoennes was born December 7, 1928, to Rudolph and Lily (Huwe) Klein in Millerville Township. Ruth attended Brandon High School and graduated in 1946. Ruth worked as a nurses assistant at St. Lukes Hospital in Alexandria until she was united in marriage to Edward Thoennes, November 11, 1947. Following their marriage, Ruth became a very active member of Sacred Heart Church. Ruth was the choir director for both the children and adult choirs, which later combined into one. She was the church organist for over 50 years, also played organ and sang duets with Ed at many area weddings and funerals. She was one of the first CCD instructor in Urbank to get her certification and was a member of the Christian Mothers. Ruth was very active in promoting serving lunches after funerals. Ruth and Ed worked side by side on their farm, and Ruth always kept the men fed with full course meals brought out to the field, pie and ice cream included. They raised their four children and one foster child. Ed and Ruth semi-retired and moved into Urbank in 1985. Ruth became caretaker of the church grounds at that time. They enjoyed their winters at their second home in Texas for the last 28 years. Ruth joined the Urbank Lions Club, helped Ed with the gaming operation and enjoyed serving lunch to the members. Ruth enjoyed quilting, gardening and baking. Everyone, especially her children, loved her chicken, pickles, doughnuts and buns, which led to her nickname "Buns Thoennes". She also enjoyed watching the Twins or Bombers baseball games, bird watching, crossword puzzles, playing cards and golf.

To order memorial trees or send flowers to the family in memory of Ruth Thoennes, please visit our flower store.