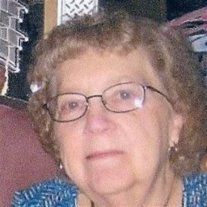 Visitation will be 5-8 p.m., Monday at Lind Family Funeral Home in Parkers Prairie and continue one hour prior to the service at the church.

Ruth Rachel Bowland was born September 28, 1931, to Willie G. and Elsie (Thorpe) Riedel in Parkers Prairie, Minnesota. She grew up in Parkers Prairie where she was baptized October 12, 1931, and confirmed June 10, 1945, at Immanuel Lutheran Church. She attended country school and graduated from Parkers Prairie High School in 1949. She was united in marriage to Larry E. Bowland June 23, 1949, in Conrad, Montana. Following their marriage they lived in Franklin Park, Illinois, where Ruth worked at Sears and later as a secretary to the credit manager at Boyd Needle. They returned to Parkers Prairie in the early 1950's, where they made their home and raised their family. Ruth completed her tax preparation education. She worked as a teller at First National Bank and as an independent tax preparer, before working for Elmer Bergquist Tax Service and Delores Thun Tax Service. She worked as a store clerk at Larson's Hardware, The Store, and Gellespies Department Store all in Parkers Prairie. She was an Election Judge for the City of Parkers Prairie, auction clerk for Bowland Auction Service, census taker, and a local news correspondent for the Independent Newspaper for many, many years. She was a housewife and mother for 63 years. She was a volunteer at the elementary school for health screenings, a Cub Scout Den Mother, P.T.A., Parkers Prairie Sports Booster and ran the bingo hall with her brother, Mel for Parkers Lions. She never retired and her door was always open for coffee and homemade donuts. She was a member of Immanuel Lutheran Church in Parkers Prairie where she was active in Ladies Aide and LWML for over 50 years. Ruth enjoyed playing bingo and trips to casinos and she loved spending time with her family and friends.

Ruth is survived by her children, Bud Bowland of Yuma, Arizona, James Bowland of Minneapolis, Judy Bowland of St. Anthony Park, Tiger (Greg) Iverson of Parkers Prairie, John (Lisa) Bowland of Foley and Tim (Cassie) Bowland of Cambridge; two brothers, Mel (JuAnn) Riedel and Duane (Myra) Riedel both of Parkers Prairie; 16 grandchildren; one great-grandson; along with many nieces and nephews.

To order memorial trees or send flowers to the family in memory of Ruth Bowland, please visit our flower store.
Send a Sympathy Card