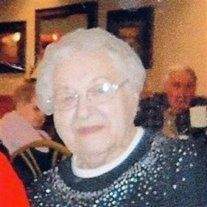 Funeral services will be held 11:00 a.m., Monday, January 14, 2013, at Faith Lutheran Church in Miltona with Rev. Stephen Olson officiating. Music will be provided by organist, Kevin Lee and vocalist, Dedra Zwieg. Burial will take place at Kinkead Cemetery in Alexandria.

Visitation will be 4-7 p.m., Sunday at Lind Family Funeral Home in Miltona and continue one hour prior to the service at the church.

Ruby Mae Nelson was born April 5, 1924, to Iven and Roxana (Rice) Hoosline in Burleene Township, Todd County, Minnesota. She grew up in Burleene Township and attended country school. Following her education she worked as a nanny/housekeeper for various families in the area. She was united in marriage to Wallace Nelson June 23, 1942, at First Lutheran Church in Parkers Prairie. Following their marriage they farmed in Eagle Bend, Rose City, Clotho and Osakis. They purchased their first farm in 1963, near Spruce Hill where they lived and farmed until the mid 1980's. They moved into their new home in Miltona where they lived until her husband, Wallace, died June 12, 1998. Ruby continued living in her own home in Miltona until she moved into St. William's Living Center in 2007. She was a member of Faith Lutheran Church and its ladies aid. She also belonged to the Miltona Senior Citizens and served as an election judge for the city of Miltona. She enjoyed writing poetry, quilting and crocheting. She especially enjoyed traveling to local casinos and dancing.

Ruby is survived by her son, Kerry (Linda) Nelson of Carlos; two daughters, Corliss Seward of Eagle Bend and Cheryl (Curt) Schimmelpfennig of Alexandria; sister-in-law, Gen Thieschafer of Long Prairie; eight grandchildren; 17 great-grandchildren and one great great-grandson; along with many nieces and nephews.

Ruby was preceded in death by her parents; husband; three sisters; brother; and son-in-law, Elvin Seward.

To order memorial trees or send flowers to the family in memory of Ruby Nelson, please visit our flower store.