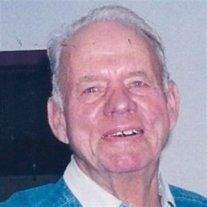 Roslyn D. Arvidson, age 84, of Parkers Prairie, died peacefully, with his family at his side, Friday, November 16, 2012, at St. William's Living Center in Parkers Prairie.

Visitation will be from 4-7 p.m., Monday at Lind Family Funeral Home in Parkers Prairie and continue one hour prior to the service at the church.

Roslyn Delane Arvidson was born May 30, 1928, to Reuben and Dora (Hansen) Arvidson in Bertha, Minnesota. He was baptized and confirmed at Esther Lutheran Church in Eastern Township, rural Parkers Prairie. He attended grades 1-8, at Joy School in Eastern Township and graduated from Parkers Prairie High School in 1946. Following his education, Roslyn worked for a year at Capital Airlines at the Minneapolis/St. Paul Airport. He returned to Eastern Township where he farmed for the next 62 ½ years. He was united in marriage to Audrey Ann Compton June 10, 1950, at Esther Lutheran Church. Following their marriage they raised their family and in addition to farming, Roslyn was active at Esther Lutheran Church, where he served as a council member and cemetery board member. He was a member of the Eastern Township Board of Directors, Lake Region Co-Op Board of Directors and Parkers Prairie District Hospital Board. His greatest joy was watching his grandchildren and great-grandchild grow up and spending time with them. He enjoyed fishing and hunting and morning coffee with friends at Cozy Cup Café.

He is preceded in death by his parents.

To order memorial trees or send flowers to the family in memory of Rosyln Arvidson, please visit our flower store.