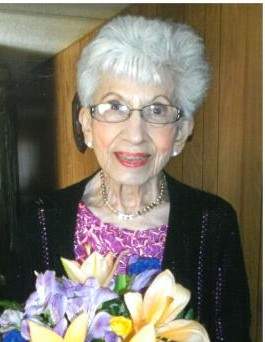 Rose Mae (Salem) Simon, age 96, of Alexandria, passed away peacefully on March 21, 2018, at her home at Edgewood Vista in Alexandria, Minnesota.

A funeral service will be held at 2:00 p.m., Saturday, March 24, 2018, at Lind Family Funeral Home in Alexandria with Rev. John Riggle officiating.  Music is provided by pianist, Kevin Lee and vocalist, Melinda Halverson.  Interment will be at Ottawa Hills Memorial Park in Toledo, Ohio.

Visitation is 5-7 p.m. Friday at Lind Family Funeral Home and will continue one hour prior to the service.

Rose was born February 26, 1922, in Stafford County, Kansas, to Alex and Debly (Hymour) Salem. Rose was the second oldest sister of 14 siblings, living most of her early life in the midst of the golden Kansas wheat fields on her parent’s farm in Cimarron.  When visiting her sister Lila in Toledo, Ohio, she met her future husband, George Simon, and they were married on August 17, 1947. She and George moved to Toledo, where they lived until retirement in 1989.  Rose was primarily a homemaker, raising her two children Ronald and Marlene, and cooking and baking a constant menagerie of foods.  As her mother before her, Rose always cooked enough for an army, and never thought anyone ate enough food. Rose helped her husband in various restaurant businesses over the years and enjoyed working and visiting with customers.  She was a member of Lotus Chapter #477 of the Eastern Stars for over 60 years and was very active with her sister Lila (her near constant companion) in her younger years.

Rose and George moved to Minnesota after retirement to be closer to their daughter and family.  Unfortunately, lung cancer took George’s life soon after, on April 29, 1990. Rose continued to live an independent life in rural Alexandria, Minnesota until moving into Edgewood Vista in September of 2017.  She had many adventures over the years with her dearest friends, Alberta, Adeline, Sharon and their families near Lake Miltona.  She was always brightened to see her family and friends.

To order memorial trees or send flowers to the family in memory of Rose Simon, please visit our flower store.