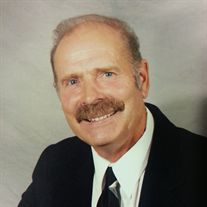 Roman Mathias Koep, age 72, of Parkers Prairie, died peacefully with his family at his side, Friday, August 15, 2014, at Hennepin County Medical Center in Minneapolis, where he had been fighting the repercussions of a tractor rollover accident since July 5, 2014.
Mass of Christian Burial is at 11:00 a.m., Tuesday, August 19, 2014, at St. William's Catholic Church in Parkers Prairie, with Fr. Peter VanderWeyst and Fr. Herb Gappa officiating. Burial is at the church cemetery.
Visitation is from 4-8 p.m., Monday at St. William's Catholic Church with a 7 p.m. parish prayer service.  The visitation will continue one hour prior to the Mass on Tuesday.
Roman was born September 13, 1941, to Arthur and Evelyn (Danelke) Koep in Parkers Prairie.   He attended Parkers Prairie High School and began his first job with the Urbank Creamery, as a milk truck driver at age 17.  He met the love of his life, Judy Dropik, at a teen hop dance in Brandon and eventually married her September 6, 1965, at Our Lady of Seven Dolors Catholic Church in Millerville. Following their marriage, they lived in Alexandria before eventually making their life-long home in Parkers Prairie where they raised their five children: Connie, Bob, Hollie, Heather, and Dustin. Roman served our country as a part of the National Guard for six years, which was a great source of pride for him. He began working for Wedum's Supply in Alexandria in 1965, as a warehouse worker, truck driver, and eventually a salesman until 1981. While at Wedum's, he started his trucking business, Koep's Septic, in 1973, which eventually became a family business that he ran with his wife and son, Bob.  Roman also farmed, ran a beef cattle operation and worked for the United States Postal Service as a rural mail carrier for nearly 35 years.
Roman was a loving, hard-working, and dedicated husband, father, grandfather, son, brother, and friend.  He was truly a servant of God by his many good deeds, saying his prayers each and every night on his knees at his bedside, and attending Mass regularly.  He loved his family, friends, and neighbors, and was welcoming to strangers, caring for and becoming attached to all living things.  He enjoyed teasing his grandchildren, along with any other kid he ever came across, by calling them all "George." Roman loved to laugh, crack jokes, tell stories, be social, and was always the life of the party. He also loved music; whether it was listening to his favorite songs on the radio, an old time band, playing his accordion, or going out dancing with Judy (mostly Polish polkas & waltzes). His genuine personality drew respect and attention from everyone he met and he made personal connections everywhere he would go. Roman was an avid car collector belonging to the Vintage Car Club of Alexandria. He loved every minute spent talking about his classic cars, going for rides, and was in his pride and glory when he could walk anyone through his car sheds, share photos or do anything having to do with old cars. He was an active member of St. William's Catholic Church where he served as a long time trustee. He was also a board member of St. William's Living Center for over 20 years and spent a lot of time helping out those in need.
Roman worked incredibly hard his entire life and even at age 72 still would not retire. He loved life and everything he did!  Recently though, Roman was finally at a place in his life where he had started taking the time to enjoy the fruits of his labor, by playing more cards (mostly 500), visiting with friends, buying roses for his wife, and spending more time with his children and their families.  No matter how busy he was, Roman always made time to be at his farm where he loved to be in the field, make hay, and just enjoy the land. Overall, Roman was passionate about every aspect of his life.  Roman's wife and children are so proud of him! He will be sadly missed by his family and so many others.
Roman is survived by his wife of nearly 49 years, Judy; children Connie (Greg) Forstner of Rapid City, South Dakota, Bob (Laurie) Koep of Parkers Prairie, Hollie (Bob) Kulzer of Osakis, Heather Koep of Melrose, and Dustin (Tracy) Koep of Hudson, Wisconsin; 17 grandchildren; mother Evelyn Koep of Parkers Prairie; sisters Margie (LeRoy) Thoennes and Carol (Alvin) Hellerman both of Parkers Prairie; along with aunts, many cousins, nieces, nephews, and friends.
He was preceded in death by his father Arthur Koep; 3 infant siblings and many aunts and uncles.
Pallbearers are Greg Forstner, Bob Kulzer, Glen Olson, Rick Gappa, Larry Moske and Bill Robinson.

To order memorial trees or send flowers to the family in memory of Roman Koep, please visit our flower store.