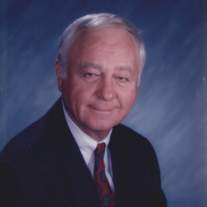 Visitation is one hour prior to the service at Calvary Lutheran Church.

Robert Dean Pulscher was born December 21, 1934, to Dick and Etta (Michaels) Pulscher in Watertown, South Dakota. Robert earned his first serious compensation by guiding non-resident pheasant hunters, beginning at age 15. His guide activities, while rewarding, caused conflicts with his school attendance but he graduated in 1952; later earning a BA degree at the University of South Dakota and an MPA from the University of Kansas. Upon graduation from USD he was commissioned a 2nd Lt in the U.S. Army's Adjutant General's Corps and served eight years on active and reserve duty. In 1956, he was married to Janet Rawlings at Sioux City, Iowa. To that union four daughters were born, Julie, Jody, Lauri, and Robin. In 1960, Robert became the youngest city manager, at age 25, in Minnesota by assuming that role for Coon Rapids where he served until 1967. He accepted the city manager position in Muskegon, Michigan and served until 1970, when he joined Springsted Municipal Advisors. He was with Springsted until 1994, serving successively as Executive Vice President, President, and CEO. At the time of his retirement, Springsted was the largest independent public finance company in the country. Robert was united in marriage to Gloria Ann Huwe, September 1991, in Minneapolis. They made their home in Alexandria where he lived until his death.

He was preceded in death by his parents; wife, Janet Rawlings; and brother, James.

To order memorial trees or send flowers to the family in memory of Robert Pulscher, please visit our flower store.