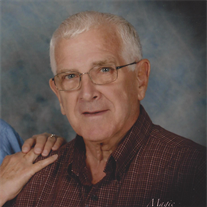 Visitation will begin at 5 p.m., and continue until the service at 7 p.m., at the Glen Haven Chapel.

Robert Verner Edstrom was born on March 5, 1940, to Robert and Marie (Bruneau) Edstrom in Minneapolis. He attended Patrick Henry High School in Minneapolis and graduated in 1958. Following his education he enlisted in the United States Army. He returned to Minneapolis after he was honorably discharged. Bob was united in marriage to Karen Knutson on October 27, 1962, in Crystal. Following their marriage they were blessed with two daughters, Christine and Jill. They lived in Minneapolis where Bob sold business forms during his career. He retired in 2002, and they moved to their Lake Irene home where he lived until his death. Bob enjoyed gardening, fishing, hunting, and cooking. He was known for being an exceptional family man who instilled in his family the love of life, sense of duty, fun, and laughter.

To order memorial trees or send flowers to the family in memory of Robert Edstrom, please visit our flower store.
Send a Sympathy Card