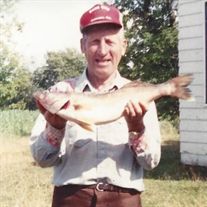 Visitation is 5-8 p.m., Tuesday, at the Lind Family Funeral Home in Miltona and will continue one hour prior to the service at the church.

Reinhold Bernhardt was born December 6, 1922, to William and Hildegard (Hiepler) Streich in Madison, Minnesota. He was baptized and confirmed at Zion Lutheran Church in Madison. He graduated from Madison High School in 1941, and following his education worked the family farm. Reinhold was united in marriage to Ramona Stroschein August 26, 1956, at Posen Church in Wood Lake. They moved to Millerville in 1960, where they farmed until 1968, at which time they moved to a farm outside of Miltona. He became a bricklayer in 1969, and helped build Arrowwood, 3M, Douglas County Jail and the Sartell Paper Company. He enjoyed going to the Motley sale barn, fishing, and having coffee with his buddies. He especially loved spending time with his granddaughter. He was a member of Immanuel Lutheran Church and the Bricklayers Union.

To order memorial trees or send flowers to the family in memory of Reinhold Streich, please visit our flower store.
Send a Sympathy Card