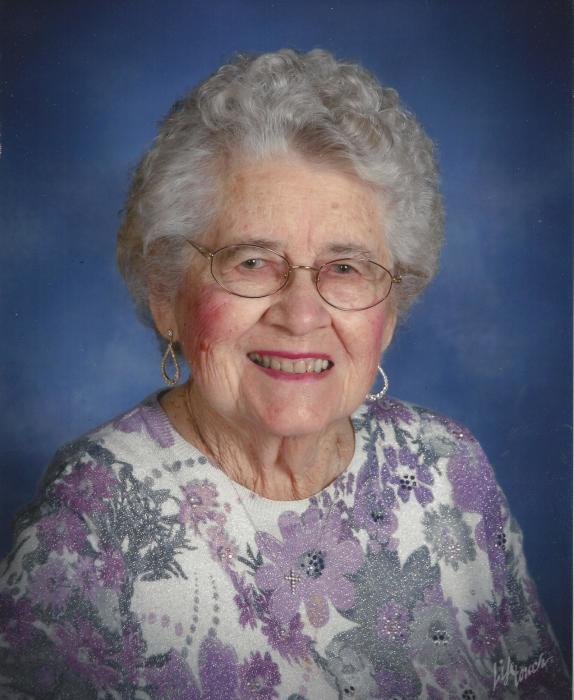 Regina M. Klimek, age 92, of Alexandria, formerly of Millerville, left this world to be with the Lord on Saturday, October 15, 2016, at Diamond Willow Assisted Living in Alexandria.

Mass of Christian Burial is 11 a.m., Thursday, October 20, 2016, at Our Lady of Seven Dolors Catholic Church in Millerville with Fr. Peter VanderWeyst officiating. Music is provided by the church choir. Burial is at the church cemetery.

Visitation is 5-7 p.m., Wednesday at Lind Family Funeral Home in Alexandria with a 7 p.m. Christian Mother’s Rosary and parish prayers to follow. The visitation will continue one hour prior to the service at the church.

Regina Martha (Roers) Klimek was born on May 12, 1924, to Edmund and Clara (Klimek) Roers, the first of nine children, in Urbank. She was baptized and attended Catholic School at Sacred Heart Church in Urbank.  Regina was united in marriage to Norbert Klimek on February 16, 1944. Following their marriage, they farmed briefly near Evansville and settled down on a farm near Urbank raising their four children. Regina was a member of Our Lady of Seven Dolors Catholic Church and was active in the church choir, Christian Mothers, Council of Catholic Women and American Legion Auxillary. She was a news correspondent for the West Douglas County Record. Regina and Norbert enjoyed polka dancing and taking vacations together, and Regina continued to do so after Norbert’s death in 1990. Regina enjoyed gardening, scrapbooking, and quilting. She loved babies, children, and spending time with family and friends including Norb and Donna Korkowski, Father Herb Gappa, Phil Roers, and Connie Lee Stich Cunningham. She loved them very much.

To order memorial trees or send flowers to the family in memory of Regina Klimek, please visit our flower store.
Send a Sympathy Card