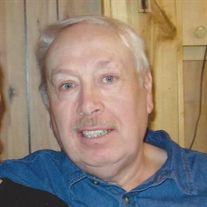 Visitation is 6-8 p.m., Thursday at Lind Family Funeral Home in Alexandria and continue one hour prior to the service at the church.

Pride Anthony Colton was born January 14, 1951, to Stanley and Rose Alice (Scherer) Colton in Detroit Lakes. He attended school in Argusville, North Dakota, Jefferson High School and Alexandria Technical College in Alexandria. While attending college for aviation in 1970, he was drafted in the U.S. Army. Following basic training and while awaiting deployment to Vietnam, his commanding officer informed Pride that he would be honorably discharged due to the death of his brother, Michael, while serving our country, in Vietnam. Pride returned to the family farm to assist with the dairy operation. He then went to St. Cloud where he installed barn equipment for his older brother, Frank Colton's business. After a year in St. Cloud, he returned to the Alexandria area, where he took over the family dairy operation. He was united in marriage to Ramona Nelson on June 19, 1976, and they were blessed with three children, Desiree, Wayne and Ross. Their son, Wayne died at the age of six months due to spinal meningitis. In 1978, a fire started in the barn and destroyed the barn and all of the dairy cows. Pride moved off the farm and found employment at Douglas Machine. He went to work at Bellanca and then Eagle Aircraft Companies doing fiberglass work. After Eagle Aircraft closed, Pride found employment with the Alexandria School District 206, as a night custodian and a year later, was promoted to head maintenance technician for all of the school buildings in the district. In 2000, he went to work at St. John's University as head of the heating and air conditioning department. Pride was responsible for all of the buildings on campus for ten years. In 2009, Pride was diagnosed with ALS at the Mayo Clinic. He had to retire from St. John's University the following year due to the progression of the disease.

He was preceded in death by his parents; son; and three brothers, Frank, Duane and Michael Colton.

To order memorial trees or send flowers to the family in memory of Pride Colton, please visit our flower store.