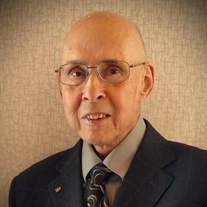 Visitation is 5-8 p.m., Monday at Lind Family Funeral Home in Parkers Prairie and will continue one hour prior to the service at the church.

Phillip Merrill Smith was born September 27, 1941, to Rev. Herman and Mildred (Whicker) Smith in Des Moines, Iowa. He was baptized and confirmed in the Methodist faith by his father. Phil graduated from Terrill, Iowa High School, Moorhead State College with a Bachelor's Degree, North Dakota State University with a Master's Degree, and Mankato State University with a Specialist Equivalency Degree in Educational Administration. Phil was teacher and high school principal in Hitterdal and Emmons, Minnesota. His father united him in marriage to Linda Anderson on March 18, 1967 at the Evangelical Covenant Church in Albert City, Iowa. They were blessed with two wonderful children. Kevin and Kari have brought much joy and many proud moments to their lives. He served in the United States Army from 1967 to 1969. He reached the rank of Spec 5 and was deployed to Germany. Following his honorable discharge he returned home to be principal for eight years at Eden Valley-Watkins High School. Phil and his family moved to Parkers Prairie in 1977, where he served as Superintendent for 22 years retiring in 1999. Following retirement, Phil worked as part time business manager of the school district for an additional six years. He was a member of the Minnesota Association of School Administrators serving one term on the board of directors. He also belonged to the Parkers Prairie Lions Club and between Eden Valley and Parkers Prairie, served 46 years, most of them with perfect attendance and held several offices. He was proud to receive a Melvin Jones Fellow Award from the Lions in 2004. He received the Art Award For Administration/Supervision for the 1999-2000 school year by the Art Educators of Minnesota. Phil was a participant in the Bush Public Schools Executive Fellow Program during 1987-88. During his time in Parkers Prairie he worshiped at First Evangelical Lutheran Church.

Phil appreciated the great support and respect of the board of education, staff, students and public of ISD #547. Phil and Linda enjoyed the peace and serenity of Lake Ida. They also enjoyed spending time with family camping, boating, water skiing, swimming and campfires. Phil loved to travel, which included many trips to extended family. After retirement Phil and Linda enjoyed their winter trips to California. Phil's greatest joy in his life was his five grandchildren.

His parents and brother-in-law Harry Bond preceded him in death.

Pallbearers are his five grandchildren.

The family prefers memorials rather than flowers. Those not designated elsewhere will go to the P547 Scholarship Foundation and Hospice of Douglas County who provided exceptional comfort and care to Phil and his family.

To order memorial trees or send flowers to the family in memory of Phillip Smith, please visit our flower store.