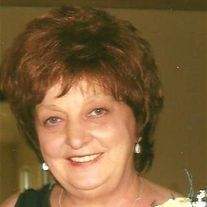 Visitation will begin at noon, two hours prior to the service at the church.

Patricia Marie Rupert was born August 2, 1948, to Lawrence and Edna (Riedel) Raap in Parkers Prairie. She was baptized August 22, 1948, by Pastor Ansorge and confirmed May 13, 1962, by Pastor Sprengeler at Immanuel Lutheran Church. She attended Parkers Prairie Public Schools and was a majorette in the marching band where she also gave lessons. She volunteered as a candy striper at the Parkers Prairie Hospital during high school, and graduated from Parkers Prairie High School. Pat was united in marriage to Donald Looker September 21, 1968, at Immanuel Lutheran Church. She was a homemaker and mother to her children. She helped her father in real estate and worked at Jill's Gas and Grocery. She was united in marriage to Tom Rupert April 17, 2004, and together they owned and operated T&A Bar & Grill. Pat worked at Donnelly Plastic Molding until retiring early due to health issues. She was a life member of Immanuel Lutheran Church. She enjoyed bird watching, flower and vegetable gardening, spoiling her grand puppies, and drinking beer with all of her friends and "her boys". She was a life-long travel agent for guilt trips, just ask anyone who knew her. Pat started every morning having coffee and playing double solitaire and Yahtzee with her husband, Tom. She will long be remembered for her excellent packing techniques.

She is preceded in death by her parents; aunts and uncles; godparents, Chester Riedel and Leona (Raap) Levering; goddaughter, Vicki Riedel and the father to their children, Donald Looker.

To order memorial trees or send flowers to the family in memory of Patricia Rupert, please visit our flower store.