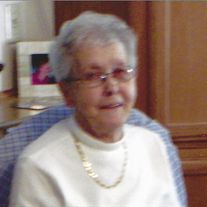 Orpha Maxine "Sandy" Johnson was born September 18, 1924, the 10th child of ten, and a twin to her brother, Owen, to Peter and Ellen (Lukken) Peterson at home in Elmo Township, Otter Tail County. She was born and raised in Elmo Township and graduated from Henning High School in 1943. She was united in marriage to Wayne Johnson September 2, 1945, at First Evangelical Lutheran Church in Parkers Prairie. Following their marriage, they lived in Parkers Prairie where they raised their five children. She was a homemaker and an excellent seamstress. She was a member of First Evangelical Lutheran Church. "Sandy" enjoyed gardening, and was a wonderful cook and baker. She loved every form of music and especially loved taking care of her grandchildren. "Death leaves a heartache no one can heal. Love leaves a memory no one can steal." Long live her memory.

Urnbearer is her daughter, Sherryl. Honorary urnbearers are her grandchildren.

To order memorial trees or send flowers to the family in memory of Orpha Johnson, please visit our flower store.