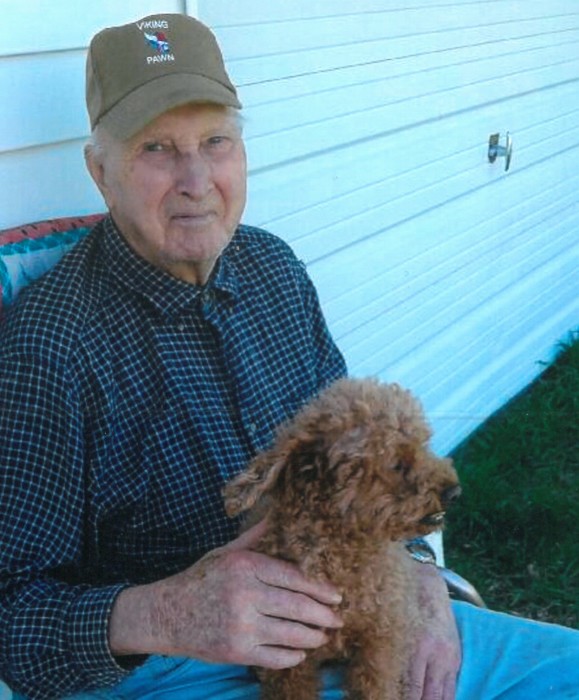 Orlin was the son of Ole C.  and Theoline “Lena” (Larson) Johnson born in Folden Township.  He was baptized and confirmed in Folden Lutheran Church on September 5, 1937. He attended and graduated the eighth grade at the Folden Township School. Orlin helped his family farm in Folden Township. He also cut wood, made fence posts with his brother, and sold fire wood to many people in Vining. On October 25th, 1950, Orlin was drafted in to the 869th medical collecting company of the Army. He was PFC first aid technician and stationed in Germany. He was honorably discharged on October 16th, 1952, in Custer, Michigan and returned to farming with his family. He had many different jobs including working for the railroad for a short time. He married Burdeen Anderson Wangerin on May 14th, 1956, at Emmanuel Lutheran Church in Sisseton, South Dakota.  Following their marriage, Orlin and Burdeen moved to Duluth. Orlin worked on the Duluth Aerial Lift Bridge, later moved back to the Vining/Henning area and returned to farming. He rented several farms before buying a farm near Almora. Orlin and Burdeen milked cows for 30 years. Orlin also mowed roadsides for Otter Tail County for 35 years. Orlin and Burdeen quit milking cows in 1992, he continued mowing roadsides and CRP land until the year 2000. Orlin was the last survivor of Ole and Lena Johnson.

He was proceeded in death by his wife; Burdeen, two brothers, Clayton and Lloyd; two sisters, Doris and LuAnn; and a niece, Tamara.

Orlin is survived by his three daughters, Karen Kuta, Marilyn Daker both of Parkers Prairie and Brenda Johnson of Gibson, Illinois; three sons, Charlie Bjorklund of Melrose, Dennis and Richard Johnson both of Henning; two step-sons, Douglas Anderson of Perham and Kenneth Anderson of Henning; several grandchildren and great-grandchildren; along with many nephews and nieces.  He will be greatly missed by many.

To order memorial trees or send flowers to the family in memory of Orlin Johnson, please visit our flower store.