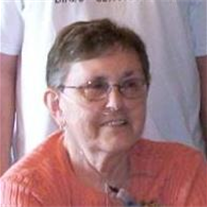 Visitation is 2-5 p.m., Sunday at Lind Family Funeral Home in Miltona and will continue one hour prior to the service at the church.

Nancy Elaine Carter was born on April 13, 1943, to Walter and Erma (Beaver) Dean in Spirit Lake, Iowa. She graduated from Eagle Bend High School in 1960. Nancy was united in marriage to David Carter on June 10, 1961, at Eagle Bend Methodist Church. Following their marriage they moved to Minneapolis where Nancy worked for Northwestern Bank. She was blessed with three children and was able to stay home to raise them. They moved to Rockford in 1971, and Nancy began working at Rockford Middle School as a playground supervisor. She eventually became the school's secretary until she retired in 2002. Following retirement, Nancy moved to their home on Lake Miltona. In 2005, they sold their lake home and moved into Miltona where she lived until her death. Nancy was a member of Faith Lutheran Church and WELCA. She enjoyed playing Bingo, Words with Friends, Scrabble, crossword puzzles, and cards. Nancy especially enjoyed time spent fishing with her husband, David.

She was preceded in death by her parents; brother, Wayne Dean; and sister, Faye Bauer.

To order memorial trees or send flowers to the family in memory of Nancy Carter, please visit our flower store.
Send a Sympathy Card