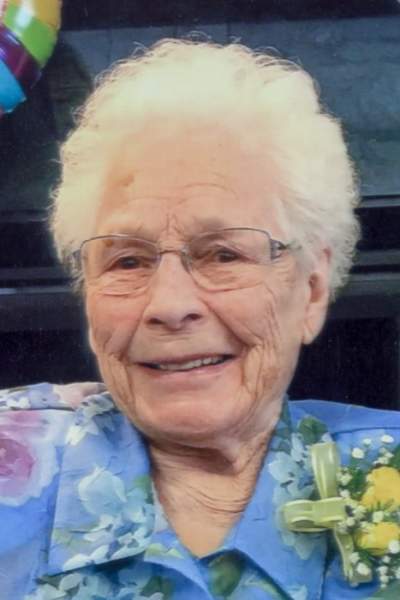 Visitation is 6-8 p.m., Sunday at Lind Family Funeral Home in Parkers Prairie and will continue one hour prior to the service at the church.

Myrtle Wilhelmina was born on April 28, 1916, to Carl “Emil” and Singney (Peterson) Skoglund in Minneapolis.  She attended school through the eighth grade in Minneapolis.  Following her education, Myrtle worked as a nanny and at Kresge’s Department Store.  She was united in marriage to Walfred Arvidson on June 6, 1938, at Spruce Hill Church.  Following their marriage, they lived in Minneapolis for a short time until they moved to Eastern Township to farm next to Walfred’s parents.  They continued to farm for 60 + years until her husband, Walfred died in 2003.  Myrtle lived on the farm until 2008, when she moved into Parkers Prairie.  She was a very active member of Esther Lutheran Church, where she was the organist from 1963-1996.  She was also active in WELCA, Homemakers, 4-H, and Birthday Club.  Myrtle loved to sew, quilt, crafts, garden, and bake.  She and her husband loved to travel on bus tours and trips to Alaska and Hawaii following their retirement.  The love of her life was spending time with her grandchildren and great-grandchildren.  Visiting with friends and family was always a highlight of her day.

She was preceded in death by her parents; husband; brother, Clifford; and daughter-in-law, Sundra.

To order memorial trees or send flowers to the family in memory of Myrtle Arvidson, please visit our flower store.