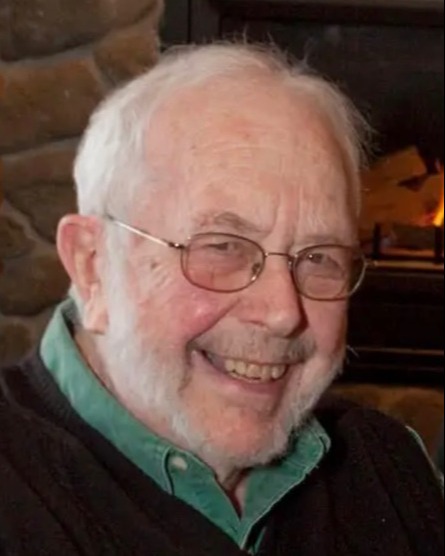 A celebration of life will be held at a later date.

In 1956, Morey bumped into Barbara Albright of Henning at the gaily decorated Leaf Lake Ballroom. They quickly fell in love and married in 1957, at St. Paul’s Evangelical Lutheran Church in Henning. They moved to Minneapolis where Barbara worked as an LPN and Morey finished law school. During their time in Minneapolis, Morey and Barb ran the Ten O’Clock Scholar, a small coffeehouse in Dinkytown. They played jazz on the hi-fi and served sub sandwiches to a young musician named Bob Zimmerman, who played guitar during the lunch rush. Whenever Morey told this story, he was quick to mention that it didn’t take long before he asked Mr. Zimmerman to take his talents elsewhere.

Morey and Barb moved to Alexandria in 1960, where Morey started a law firm with his friend Robert Swenson. Together, they built a practice that has served the people of Central Minnesota for more than 60 years. He was a compassionate champion for his clients and a mentor to young lawyers. He was the Alexandria City Attorney from 1961 to 1968 and was elected President of the Minnesota Association of City and Village Attorneys in 1964. In 1971, Morey helped establish the Alexandria Lake Area Sanitary District (ALASD) which has reduced wastewater pollution and restored the health of countless lakes in Douglas County. He served as legal counsel for the ALASD for more than 45 years. He was a long-time member of the Alexandria Rotary Club and a Paul Harris Fellow.

In 1962, Morey and Barb welcomed their son, Paul, daughter, Carla joined the family in 1966. Morey taught his children to ski and sail, and to appreciate jazz music and good food. He hunted duck and grouse with Paul, and talked music and politics with Carla. Morey also adored his three grandchildren and was so proud of the good and kind people they are. He would often stop in the middle of a family gathering and say to Barb, “We are so blessed.”

Together, Morey and Barb built a close-knit circle of friends. Morey was known for his gourmet cooking and his Deer Creek stories told over cigars and Manhattans on the porch. He was kind, generous, and loyal. He was an avid fisherman, hunter, golfer, chef, athlete, and musician. He was often a fan of the Vikings. He was full of beans and buckshot.

Morey was preceded in death by his parents. We like to think he was welcomed into the gates of heaven by a host of hunting buddies, golf partners, fishing pals, and old friends who were waiting with a cocktail, a nice cigar, and shouts of “Grover! What took you so long?”

Donations in Morey’s honor may be made to the Wounded Warrior Project and the National Wildlife Federation.

To order memorial trees or send flowers to the family in memory of Morris Arthur Grover, please visit our flower store.