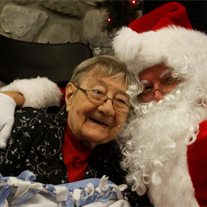 Visitation is one hour prior to the service at the chapel.

Millie Ljudmila Skalar was born on September 12, 1921, to Janez and Franciska (Mali) Gorjanec in Kanderse, Slovenia. She was baptized on September 14, 1921, and confirmed on May 15, 1932. She attended high school and business school for a short time. She was united in marriage to Frank Skalar on June 15, 1960, in Ljubljana, Slovenia. Following their marriage, Millie and Frank moved to the Ely area. Following Frank's death, Millie continued to live in Ely for a year until she moved to Urbank. Millie worked as a housekeeper for Fr. Carl Pecovnik for many years at the Urbank and Lake Reno parishes. She retired in 1980, and moved to Parkers Prairie. She was a former member of St. Nicholas Church in Belle River. Millie spent the last eight years under the care of St. William's Living Center. Millie enjoyed reading and feeding hummingbirds. She was fun loving, kind and will always be remembered for her love of kittens and cats. Blessed be her memory.

She was preceded in death by her parents; and husband, Frank.

Millie is survived by her cousin, Ivan Rogelj of Slovenia; other relatives in Slovenia; and friends at St. Williams' Living Center.


To order memorial trees or send flowers to the family in memory of Millie Skalar, please visit our flower store.
Send a Sympathy Card