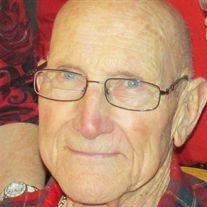 Marvin O. Buker age 84, of Alexandria, passed away on May 21, 2015, at the Ecumen Bethany Community in Alexandria following a short illness.

Marvin was born on November 25, 1930, to Walter and Elsie (Bathel) Buker in Waseca. He was baptized and confirmed at St. John Lutheran Church in Waseca. He attended country school through the eighth grade and then left school to work on the family farm. He was united in marriage to Loretta M. Clark June 14, 1953, at St. John Lutheran Church in Waseca. Marvin was employed with E.F. Johnson Company in Waseca until 1981, at which time he and Loretta moved to Alexandria. They loved the lakes and fished together often. They enjoyed entertaining and taking people fishing. In Alexandria he was employed by Douglas Plating, Inc. He eventually struck out on his own with a partner and started Central Minnesota Finishing in Sauk Centre. He remained involved in that business until he retired in 2004. He lost the love of his life August 6, 2010, when Loretta passed away. Marvin had many interests. He loved to hunt and fish and did so every chance he got. He enjoyed family time and did his best to make it to every event. He was a frequent visitor to the country music theater in Sandstone. But, the thing he loved the most was being with people. He loved to laugh and joke.

He was preceded in death by his wife, Loretta; parents; one brother; and one sister.

Per his request, there will not be a public memorial service. The love and support of his family and friends while he was alive was all he ever needed.

To order memorial trees or send flowers to the family in memory of Marvin Buker, please visit our flower store.
Send a Sympathy Card