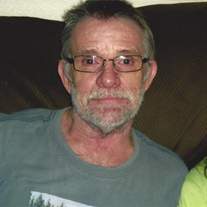 Marlin Raymond Zuehlke was born on August 23, 1957, to Leonard and Fern (Greiner) Zuehlke in Parkers Prairie. He attended Parkers Prairie Public Schools until he enlisted in the United States Army. Following his honorable discharge he was united in marriage to Anita Gruwell and to this union two children, Rondi and Rory, were born. Marlin worked as an auto mechanic for most of his life. He met Cindy Steinka in 1977, and they were married in 1981 and to this union their daughter, Alicia, was born in 1985. During their marriage they also farmed. Marlin met Kathy Miller, whom he spent his remaining years with in St. Cloud. He enjoyed hunting, fishing, farming, and working on cars. Marlin loved spending time with his family and especially his grandson, Brody.

He was preceded in death by his parents; and brother, Duane.

To order memorial trees or send flowers to the family in memory of Marlin Zuehlke, please visit our flower store.