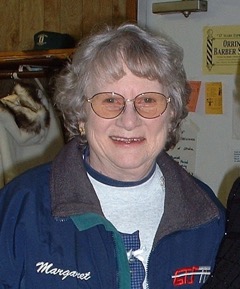 Margaret was born December 21, 1922, to George and Olive (Sutherland) Brunson in rural Parkers Prairie She attended school in rural Parkers Prairie and graduated from Parkers Prairie High School in 1940.  She married Benjamin Dittberner on May 6, 1945, at the Parkers Prairie First Baptist parsonage. They lived and farmed around Parkers until moving to Wadena, where Margaret worked as a waitress and cook for several years. Margaret married Harold Esteb on May 17, 1969, in Brooklyn Park where she enjoyed being a stay at home mom, wife and loving grandmother and was active in the Church of Christ. In 1973, they moved to Monticello until retiring and moved to Staples in 1985. Margaret later moved back to Parkers Prairie in the late 90‘s, and has resided at St. Williams Living Center since December of 2012.  Margaret was a fun-loving person who enjoyed traveling and visiting family and friends. She enjoyed playing the piano, knitting and crochet and made numerous slippers and afghans that she loved to give as gifts to many. Margaret also enjoyed gardening, sewing, canning, baking and cooking, playing cards and marble board game. Margaret had a heart to serve others. In her early years on the farm she loved horses and liked driving horses doing field work and riding on horse drawn machinery with her older brothers. Margaret was baptized at age 16, at the First Baptist Church of Parkers Prairie where she also served as Sunday School Superintendent and played piano during Sunday school and youth gatherings.

To order memorial trees or send flowers to the family in memory of Margaret Esteb, please visit our flower store.