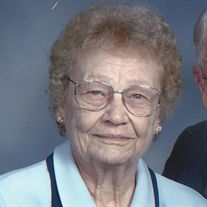 Visitation is 5-7 p.m., Monday at Lind Family Funeral Home in Parkers Prairie and will continue one hour prior to the service at the church.

Luvern Ethel Hollatz was born March 7, 1920, to Carl and Dora (Wangerin) Zinter in Effington Township. She was baptized by Rev. Herman Kelm and confirmed August 5, 1933, by Rev. Schamberg at Zion Lutheran Church, North Effington Township. She attended Country School District #218, through the eighth grade. Luvern was united in marriage to Elmer Hollatz December 3, 1937, in Fergus Falls. Following their marriage they began farming in the Vining area before moving to Eastern Township where they farmed until retiring in 1972. Following retirement, they moved to Fridley where they lived until returning to Parkers Prairie in February of 1982. Luvern was a member of Immanuel Lutheran Church and former member of its Ladies Aid. She loved to take care of her flowers and plants both inside and out, fishing, and visiting with friends and family. She was especially fond of her little cat, Whitey.

She was preceded in death by her parents; daughter, Marcene Froemming in 1976; husband, Elmer in 2011; four grandchildren, Mark, Randy, Jeannie Marie and Wendy; brother-in-law, Edward Jahnke and little dog, Mitzy.

To order memorial trees or send flowers to the family in memory of Luvern Hollatz, please visit our flower store.
Send a Sympathy Card