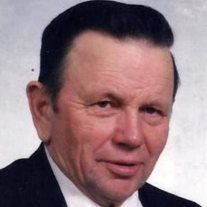 Visitation is 5-8 p.m., Friday at Lind Family Funeral Home in Miltona and will continue one hour prior to the service at the church.

Lowell Edmond Christianson was born April 29, 1928, in Spruce Hill Township to Frans Olaf Wilhelm and Hannah Louise (Anderson) Christianson. He was baptized at Spruce Hill Lutheran Church and later confirmed on September 7, 1941. He attended Country School District #65, and graduated from Central High School in Alexandria in 1946. Following his education he helped his father on the home farm. He was united in marriage to Lenore Backberg September 24, 1949, at Faith Lutheran Church in Staples. Following their marriage they continued farming in the Spruce Hill Township area and in the spring of 1953, moved to live in the home that they kept until 2012. He was a member of Spruce Hill Lutheran Church and later Faith Lutheran Church serving on both church boards for over thirty years combined. He also attended Faith Men's Club in Miltona. He was Sunday School Superintendent and teacher at Spruce Hill for many years. He was sextant of the Spruce Hill Cemetery and caretaker for the Spruce Hill Lutheran Church for many years. He served on the Spruce Hill Town Board and the Douglas County Spruce Hill Historical Society. It was important to Lowell that the church be used for God's ministry. He was happy that he could help the Douglas County Historical Society with three services a year from 1994 to 2008. When he was no longer able to do much farm work, he did yard work and baked cookies, sometimes in the middle of the night.

He was preceded in death by his parents; daughter, Judy (Christianson) Olsen on March 28, 2002; brothers, Dennis and Arnold; and wife, Lenore on September 19, 2012.

To order memorial trees or send flowers to the family in memory of Lowell Christianson, please visit our flower store.
Send a Sympathy Card