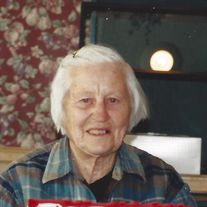 Funeral Services are 11 a.m., Tuesday, May 5, 2015, at Esther Lutheran Church in Eastern Township with Rev. Jeanette Bidne officiating. Music is provided by organist, Marcia Guenther and vocalist, Dedra Zwieg. Burial is at the church cemetery.

Visitation is 5-8 p.m., Monday at Lind Family Funeral Home in Parkers Prairie and will continue one hour prior to the service at the church.

Louisa Ida Carlson was born January 27, 1921, to Charles and Clara (Bertrum) Fisher in Campbell, Minnesota. She was baptized and confirmed in the Lutheran Faith and attended Vining Country School through the eighth grade. Following her education her family moved to Sebeka. Louisa went to work for Don Danielson of Eagle Bend where she met her future husband, Albin Carlson. They were united in marriage February 4, 1955, in her family home in Sebeka. Following their marriage they made their home in Eagle Bend where she was blessed with one daughter, Clara. Louisa was a homemaker for over 57 years and enjoyed gardening, taking care of her chickens and cattle, embroidering and quilting. She loved to bake with her grandchildren and enjoyed watching them grow. She was a member of Esther Lutheran Church. In her younger years, Louisa loved going to the threshing show at Rose City, Dalton and Albany with her brother Charles and his wife, and playing bingo with her sister, Dorothy. She volunteered at fair share in Dalton for two years. Louisa loved to listen to "Wheeler Dealer" every Wednesday at 10 a.m., on the radio and would stand and listen to her favorite song "On the Wings of a Snow White Dove," when it was played. Louisa moved to Knute Nelson in May of 2012, where she made many friends, appreciated the staff and enjoyed playing bingo every Thursday. It brought her great pleasure when Clara would bring KFC chicken and pizza from Pizza Hut on her visits.

She was preceded in death by her parents; loving husband, Albin in 1987; great-grandson, Mitchell (Moyle) Casperson in 2003; grandson, Carl Moyle in 2006; son-in-law, Larry Moyle in 2008; and two brothers Charles Fisher and Lester Fisher.


To order memorial trees or send flowers to the family in memory of Louisa Carlson, please visit our flower store.