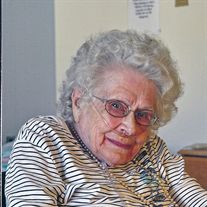 Visitation one hour prior to the service at the church.

Lorna Irene was born March 10, 1916, to Oscar and Mae (Gunderson) Olson in Vining, Minnesota. She attended country school and graduated from Henning High School. She was united in marriage to Raymond Zunker February 3, 1938, in Vining. Following their marriage they moved to Miltona Township where they farmed and raised their family. Her husband, Ray died December 27, 1998. Lorna continued living on the farm until she moved to Bethany Community Home in Alexandria in 2009. She was a member of Mt. Calvary Lutheran Church where she brought roses to the church every Sunday for 32 years, taught Sunday School, sang in the choir and was active in Ladies Aid. Lorna enjoyed gardening and while raising her family, loved cooking and baking.

She was preceded in death by her parents; husband; brothers, Marland and Kenneth and granddaughter, Jennifer.

To order memorial trees or send flowers to the family in memory of Lorna Zunker, please visit our flower store.
Send a Sympathy Card