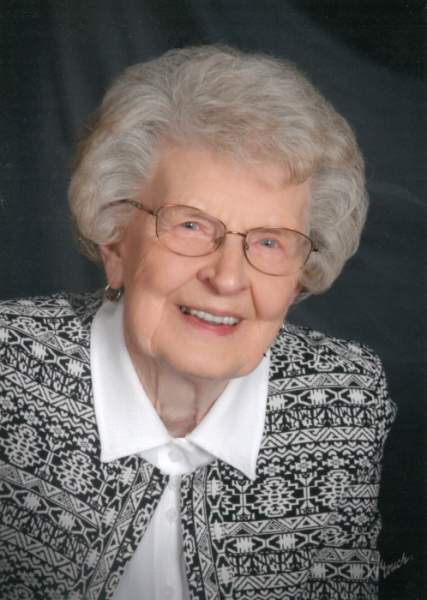 A funeral service will be held at 11 a.m., Monday, February 3, 2020, at Calvary Lutheran Church in Alexandria with Angie Larson, Executive Minister officiating. Music is provided by organist, Rebecca Worley and Lois' granddaughters. Interment is at Evergreen Cemetery, Alexandria.

Visitation will begin at 9:30 a.m., Monday at the church.

Lois Idalyn Johnson was born on February 26, 1929, the daughter of Hjalmer and Alma (Nelson) Johnson. She grew up on the family farm in Moe Township, attended Mill Lake country school through 8th grade and graduated from Alexandria High School. Following high school, Lois lived and worked in Alexandria, it was during that time when she met Milton Whiting. They were married on June 17, 1950, at Trinity Lutheran Church in Holmes City.  Milt and Lois continued to live in Alexandria raising their three children Greg, Cheryl and Doug.  A homemaker while her children were young, Lois worked part-time at several businesses after her children were grown. She was an active member of Calvary Lutheran Church, teaching Sunday school, attending circle, serving on the archives committee and other activities. Lois enjoyed baking, gardening, vacationing with her family and she especially enjoyed her grandchildren.  After Milt’s retirement they traveled on bus trips and were regular attendees at their grandchildren’s events. Milt died suddenly in April 2000, as a result of a car accident. Lois continued in his role as the Secretary of the Evergreen Cemetery Association for 15 years. She was very active in her grandchildren’s lives and her friends at Calvary were very dear to her. In February 2014, Lois moved to Grand Arbor. She loved living there and enjoyed seeing old friends and making new ones.

She was preceded in death by her parents; husband; brother, Charles Johnson; and grandson, Michael Whiting.

Pallbearers are her grandchildren.

To order memorial trees or send flowers to the family in memory of Lois Whiting, please visit our flower store.