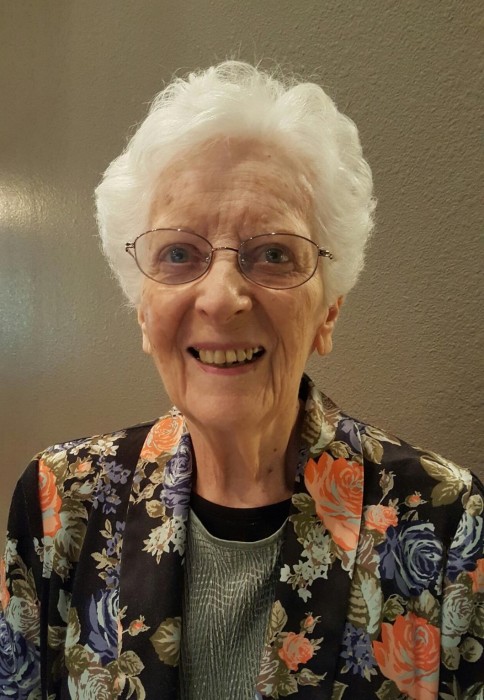 Lillian Arlene Johnson, called “Arlene” by her family and friends, passed away Wednesday, March 18, 2020 at the age of 91.

A celebration of life will take place at 2 p.m., Saturday, October 10, 2020, at Church for the Harvest in Alexandria with Pastor Mike Bartolomeo officiating. Arlene’s service will be live streamed from her obituary page on the funeral home’s website.

A private family graveside service was held at Summit Cemetery in Morris.

Arlene was born on February 11, 1929, in Lead, South Dakota, the second child of Clifford and Lucille (Burbidge) Edwards.  Growing up in the Black Hills, Arlene loved to walk and hike around the hills and woods surrounding the town enjoying God’s beauty.  Walking continued to be a favorite exercise throughout her life.

Following graduation from Lead High School in 1946, Arlene pursued college studies at South Dakota State in Brookings, where she met her future husband, Carl Johnson.  They were married in Lead in 1950.  Carl, having graduated as a pharmacist, purchased a drug store in Morris, Minnesota in 1952, and they continued to live there for many years.  After their daughters, Jenifer and Julie, were in school, Arlene enrolled at UMM, obtaining her teaching certificate which opened the door for a Chapter I teacher’s assistant position in the local schools.  She greatly appreciated and enjoyed working with the children and teachers.  Arlene retired from her teaching position in 1995, shortly before Carl’s passing.

Music was an important part of Arlene’s life.  She learned to play the piano at a young age and continued playing through most of her life.  In the early years in Morris, Arlene was part of a quartet singing group and a member of church choirs.  In addition, Arlene was very artistic and used her talents by designing and/or creating banners and posters for churches, school concerts and women’s events.   She and Carl enjoyed being involved in square dancing and round dancing groups.

Arlene’s faith in the Lord really grew in the 1960’s after she went forward for the salvation call at a Billy Graham Crusade in Minneapolis.  Her knowledge of the Bible was fueled by attending Bethel Bible courses in the 1970’s.  After her children were older, Arlene got even more actively involved in her church in Morris, Hosanna Worship Center, and in Women’s Aglow International.  In the late 1990’s, Arlene took her first trip to Israel with some other “South Dakota” people, a group from Lowell Lundstrom Ministries.  While Arlene’s favorite place to be was anywhere with family, the next favorite place on her list would be in Israel.  She would make four additional trips to Israel with groups from Aglow International, and those journeys were truly treasured times for her.

In the early 2000’s, Arlene moved to Alexandria to be closer to Julie and her family.  The move was easy for her because she knew so many people who already lived there, plus she knew she would have a church home at Church for the Harvest.  While living in Alexandria, she was involved in prayer groups, Bible studies and Aglow International.   Arlene also took many trips to Texas to stay with her daughter, Jenifer and her family, and she so enjoyed each and every moment that she got to be with them.  In 2016, health issues caused Arlene to move to the Grand Arbor assisted living facility in Alexandria where she spent the last season of her life under the excellent care of the care givers there.

Arlene was kind, gracious, and generous to everyone she met.  Her faith was evident in her daily walk of life and she truly loved to bless others.

To order memorial trees or send flowers to the family in memory of Lillian "Arlene" Johnson, please visit our flower store.
Send a Sympathy Card