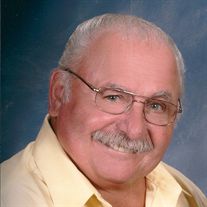 Mass of Christian Burial is 11:00 a.m., Wednesday, July 2, 2014, at Our Lady of Seven Dolors Church in Millerville with Rev. Matthew Crane officiating. Music is provided by Voices of Joy, lecturer, Craig Stich and servers, Lydia and John Hansen. Burial will take place at the church cemetery, with the procession from church following mass, 11:45 a.m., Sunday, July 6, 2014.

Visitation is 5-8 p.m., Tuesday at the church where parish prayers are at 7:00 p.m., followed by a rosary. The visitation will continue one hour prior to the service.

LeRoy was born February 1, 1943, to Paul and Mary (Revering) Suchy and was the seventh of twelve children. LeRoy was joined in marriage to Annette Cecilia Daas on July 10, 1965, at Our Lady of Seven Dolors Church in Millerville. They lived in South St. Paul and Newport, Minnesota while LeRoy was employed at Armour and Dalsin Roofing. In 1983, they purchased a dairy farm and moved back to the Millerville area. When LeRoy was younger, he loved playing baseball and softball and would often talk about how he was the best second baseman, which had nothing to do with the fact that his dad was the umpire. He would reminisce about the fun times he and his siblings had growing up, telling stories like how he and his brothers, after watering the calves, would ride them back into the barn, and once LeRoy crashed into the barn door getting a rusty nail stuck in his knee. As he got older, LeRoy enjoyed watching television, particularly the History Channel, where he would often call his brother Bernard to ask, "Are you watching this?" He also loved golfing with his family and classmates on his league team, and it wouldn't be unusual to hear him say, "If you want to see how the pros do it, just watch me." LeRoy and his family were also avid card and dice players and he almost always came out on top, often commenting, "Well, my name does mean The King." LeRoy was honored to be a mass server at funerals and a janitor in the church, and if you were anywhere in the church when he sang "Amazing Grace" or "How Great Thou Art," you were bound to hear his boisterous voice. LeRoy's sense of humor, heart, and dynamic personality will be missed.

LeRoy is preceded in death by his mother and father; father-in-law, Bernard Daas; sister and brother-in-law, Lorraine (Jim) Gluba and his sister-in-law, LuAnne Daas.

To order memorial trees or send flowers to the family in memory of LeRoy Suchy, please visit our flower store.