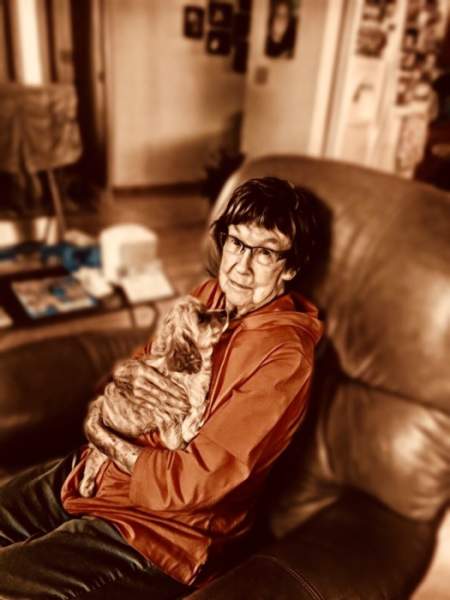 Leona M. Poirier, age 92, of Alexandria, died peacefully, surrounded by her family on Thursday, February 27, 2020, in her home in Sun City West, Arizona after a brief illness, under the care of Seasons Hospice.

A funeral service will be held at 1 p.m., Saturday, March 14, 2020, at Lind Family Funeral Home in Alexandria with Rev. Greg Billberg officiating.  Music is provided by Kim Byrne, Lauren Larson and her grandchildren. Private interment will take place later.

A visitation will take place one hour prior to the service.

Leona Mae was born on August 29, 1927, to Melvin and Amy (Olson) Angrimson in Montevideo, Minnesota.  She attended public school and graduated from Montevideo High School. Leona was united in marriage to George Stuart Poirier on June 26, 1949, in Montevideo.  Following their marriage, they owned and operated the Montevideo Daily Reminder and were blessed with four children.  In 1959, George and Leona purchased a specialty apparel store in Glenwood and named it Glenwear.  They expanded into downtown Alexandria two years later and moved their family to Alexandria.  Glenwear opened in the mall in 1977, and George and Leona semi-retired in 1978. They enjoyed spending as much time as they could golfing, eating out and winters in Arizona, always returning home to celebrate Christmas with their family.  George died suddenly on April 16, 2014, while in Arizona.  Leona continued helping her daughters at Glenwear until it closed on February 28, 2018.  She was a member of First Lutheran Church and the Eastern Star.  She was always up for an adventure and enjoyed camping and traveling with family.  Leona was a wonderful mother and grandmother, loved baking and spending time, especially holidays with her family.  She lived life to the fullest and will long be remembered for her kindness and love of family.

She was preceded in death by her parents; husband; son, Michael, two brothers; two sisters; and a great-grandson, Jonathon Larson.

Memorials preferred to the Children’s Ministry Fund at First Lutheran Church in Alexandria.

To order memorial trees or send flowers to the family in memory of Leona Poirier, please visit our flower store.