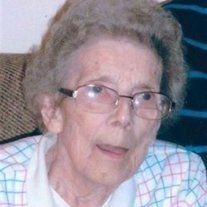 Visitation will be 5-7 p.m., Sunday at Lind Family Funeral Home in Miltona and continue one hour prior to the service at the church.

Lenore Mae was born December 12, 1921, to Jonas Leonard and Christine Johanna (Christianson) Backberg in Verndale, Minnesota. She was baptized at home and confirmed at Faith Lutheran Church in Staples. She attended Staples Public Schools and graduated from Staples High School in 1939. She took Teacher's Training in Staples for a year and completed her education in Moorhead and St. Cloud. During WWII, Lenore also completed a course in radio communication. Following her education, she taught in one-room country schools for nine years, including District #74, in Otter Tail County, District #11, on the south end of Lake Adley, District #64, near Spruce Centre and District #66, in Spruce Hill. She retired from teaching in the spring of 1949. Lenore was united in marriage to Lowell Edmond Christianson on September 24, 1949, at Faith Lutheran Church in Staples. Following their marriage, they farmed in the Spruce Hill Township area and in the spring of 1953, moved to live in Spruce Hill Township. Lenore was formerly a member of Spruce Hill Lutheran Church and a member of Faith Lutheran Church in Miltona. She was a Sunday School teacher and member of LCW. Her hobbies included painting, gardening, reading, embroidering and word puzzles of all types. She will be well remembered for her generosity and caring of others.

Pallbearers and honorary pallbearers will be her grandchildren.

To order memorial trees or send flowers to the family in memory of Lenore Christianson, please visit our flower store.
Send a Sympathy Card